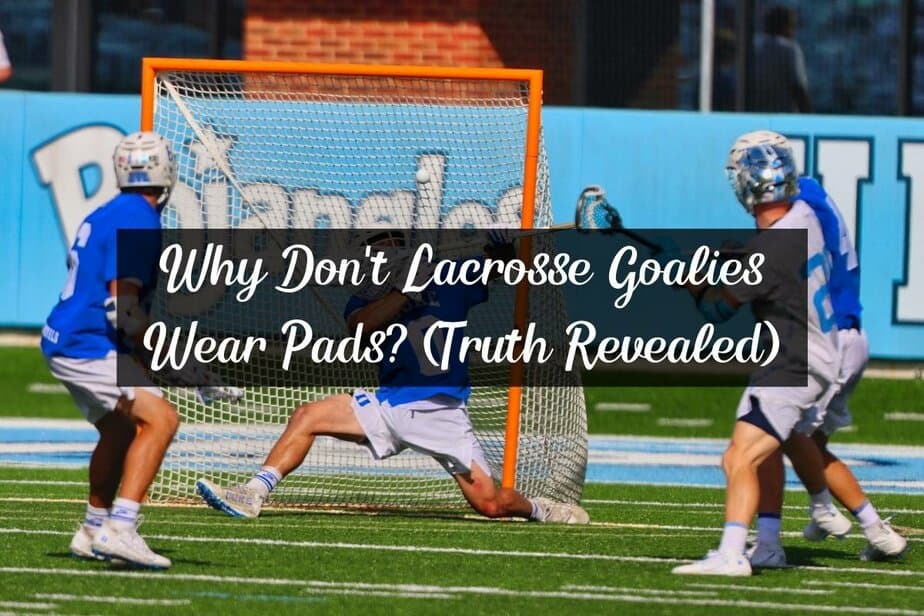 I remember when I first watched lacrosse and noticed that the goalies don’t wear pads. That shocked me, especially after learning how fast lacrosse balls travel. This got me to wonder, why don’t lacrosse goalies wear pads?

Generally, lacrosse goalies don’t wear pads because of tradition, the fear of being labeled a tradition breaker and a coward. Ego is a big part of that because by not wearing pads, you will gain respect and a reputation as a tough goalie.

The tradition of not wearing pads or nearly any kind of protective wear comes from lacrosse history. Much like in other sports like ice hockey, the protective wear was not good compared to today’s sports and lacrosse. There is one big flaw with that.

Indeed, goalies didn’t wear pads or many other kinds of equipment back in the day, yet the sport wasn’t as evolved as it is today. Thus, the throws, sticks, and players couldn’t generate that much speed on the ball. Today, the players and sticks can create much more power on the throws, so it’s stupid not to wear pads.

This can be easily seen thanks to a study by Graham Walker. In the study, he noticed that a modern stick created an average throw speed of 94mph, whereas, with an old stick, the speed was between 64 to 69 mph. That’s a big difference to get struck by on the shinbones.

The same study showed that a modern stick struck the desired target with 80% accuracy, whereas only 60% with the old stick. In conclusion, modern sticks are 30% more powerful and 25% more accurate than old sticks.

Therefore, you shouldn’t base your protective equipment standers such as shin guards on the old numbers.

The dangerous and badass appearance of field lacrosse goalies is convincing. However, it can hurt from time to time, so leg pads sound appealing. But the real question is, can they?

Despite tradition and macho culture, lacrosse goalies can wear pads. In fact, in modern lacrosse, shin guards are encouraged because the benefits outweigh the cons.

For example, the fear factor without pads will become big, which we all know isn’t good for goalies. The amount of fear naturally depends on the goalie, but it is noticeable even at a professional level, so using extra protection on the shins can make you save better!

There is the factor of tradition, ego, and fear of being labeled as a coward and becoming the subject of team jokes. Yet, having an ego for that and fearing a couple of jokes is the exact opposite of being a macho man, as machomen doesen’t care what others think.

Given that lacrosse goalies have the chance to wear shinguards, everyone should take advantage to do so.

Does It Hurt to Be a Lacrosse Goalie?

Given the lack of pads and other protective equipment amongst lacrosse players, you got to wonder whether it hurts to be one?

In short, being a lacrosse goalie does hurt. Depending on the ball’s speed and the angle at which it hits you, the ball can feel excruciating. Although you get slightly used to the pain, it will always be painful.

The good thing is that lacrosse goalies do use helmets, shoulder pads, and an athletic cup, among other things. However, leg pads such as G-Form Pro-S Elite are often missing. Thus, a shot that can exceed 100mph will most definitely hurt a leg without protection.

Many lacrosse goalies say that it’s not a big deal to goalkeeper without pads in games, but the practice makes it hurt more as it’s long-lasting.

In conclusion, I recommend using shin guards as the benefits outweigh the cons.

Are There Benefits of Using Pads In Lacrosse?

In lacrosse, leg pads are a topic of many opinions. Given the facts you have already learned, are there benefits of using pads such as G-Form Pro-S Elite, or are shin guards just not worth your time in lacrosse? Let’s take a look at some benefits!

As you can see, the benefits you can get from wearing simple pads are massive. However, there are as many myths as the benefits of using pads in lacrosse. What are the myths, and are they true?

What Do Girl Lax Goalies Wear?

Girls lacrosse is becoming more popular by the year, and that’s incredible. As the male lax players don’t wear leg pads, is it the same for girls, or do they wear more protective equipment?

The women’s lacrosse rules state that a goalie must wear a helmet with a face mask, a separate throat protector, padded gloves, a mouthpiece, and a chest protector. The helmet and chest protector must be certified to NOCSEA standards. Recommended gear includes padding on arms, legs, and shoulders.

In essence, men and women lax goalies wear the same equipment, and there are no more required from women.

However, nearly all male lacrosse goalies wear an athletic cup to protect the genitalia, although it isn’t specifically required in any rulebook. Still, the cup is an unwritten rule that most goalies follow.