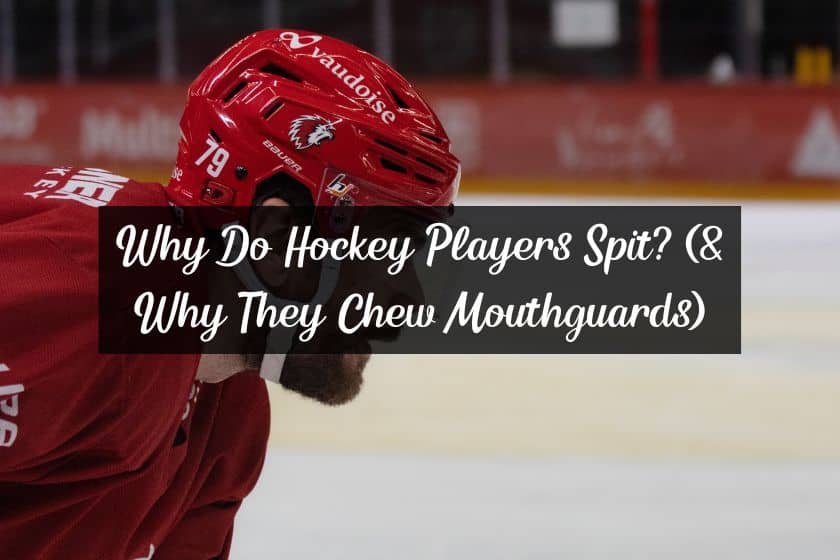 When you watch hockey regardless of league, whether that’s a local match or an NHL game, you will see players spitting a lot. In this article, I’ll walk you through why hockey players spit so much, among other things.

Hockey players spit so much because intense physical exercise increases saliva production. Also, spitting right after drinking water will satisfy the thirst and clear the mouth without swallowing too much water. Finally, hockey players spit because they can, as it won’t matter on the ice.

That said, there are not one or two but three reasons why hockey players spit. Next, let’s review each reason individually so you can understand why it’s done.

Related: How Do Hockey Players Get Points? (& All Time Records)

The first reason and the most considerable one is hard physical exercise. You will need more oxygen when you train hard, which causes you to breathe faster and heavier. In regular sports, this is enough to accelerate your mucus buildup; however, the air in hockey arenas is cold, which further fastens saliva production.

Chilly air enters your lungs as you breathe, leading to fast saliva buildup in your mouth and coughing. Naturally, you don’t want to swallow all this excess saliva as it’s gross, so you will spit it out if you can, and that’s exactly what the hockey players are doing.

Generally, players do this to rinse their mouth from saliva and to freshen up, but they don’t want to swallow that unfresh saliva water.

Another reason is to burst out the inside of their mouth with carbohydrates (sports drinks). According to Sports Science Exchange, rinsing the mouth with a carbohydrate-containing solution is associated with improved high-intensity endurance exercise performance.

Last but not least, the hockey players can spit practically where ever they want as it will freeze on the ice and won’t cause any harm.

In contrast, basketball players can’t spit on the court as it’s an indoor wooden court, and the playing object (basketball) would be infected with it. Also, the players could slip on the spit.

So, when you’re between heated contests on the ice, spitting is desirable, and given that you can, the payers will.

Why Do Hockey Players Chew On Their Mouthguards?

Another phenomenon in addition to spitting is mouthguard chewing. Hockey players do indeed chew on their mouthguards, but why is that?

Hockey players chew mouthguards because they are trying to make them fit better, out of habit, or appearance to look cool.

For example, Patrick Kane and Mikael Granlund are known to chew their mouthguards. Also, Steph Curry from basketball is known to do it consistently, and the list could go on and on.

Next, let’s take a closer look at why chewing mouthguards are so common.

When a hockey player or an athlete from another sport chefs on his mouthguard or lets it hang out of his mouth, it can be that it doesen’t fit him properly.

All mouthguards aren’t as great as the others, and not all mouthguards fit everyone. If the mouthguard doesen’t fit, it would create discomfort, which is why a player might chew on it to make it mold better or hang it out, so the discomfort goes away momentarily.

The most common reason for players to chew on mouthguards is a habit. A big reason baseball players chew gum is to get focus from it, and it’s the same for hockey players and their mouthguards.

Most people don’t even think about or realize that they are biting the mouthguard, so a habit plays a big role.

“It’s something I’ll catch myself doing, and I’ll be like, ‘Put your mouthpiece back in your mouth.’ It’s just a habit I guess.”

Hockey players might chew a mouthguard because it looks cool and because other more known players such as Kane or Granlund chew theirs. They set the example, and naturally, many people will follow their lead.

It’s not like people are thinking, ”I’ll chew this mouthguard, and I look amazing,” but more of a subconscious thought being a factor in the chewing. More often, it’s done because of a habit or a bad fit.