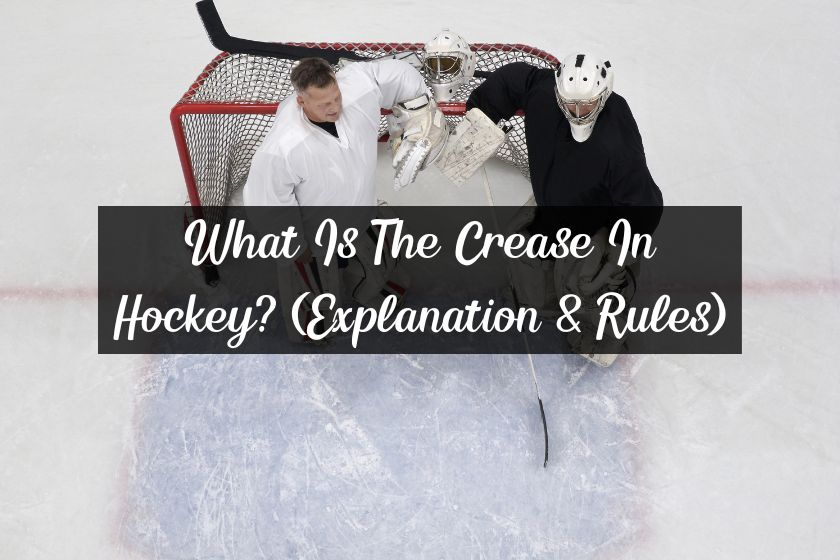 Crease also called the goalie box or goal crease in hockey, doesen’t mean pleats or wrinkles, but it has a meaning of its own. It all revolves in front of the hockey goal, and in this article, you’ll learn what crease is, what the rules are regarding it, and much more. But first, what’s the crease in hockey?

The crease in hockey is the blue area within the blue lines in front of both goals. This area marks the optimal area for the goalie to protect the goal from pucks, although their movement isn’t limited to the crease.

When looking at the crease, its shape is a semi-circle with a straight line on the goal’s end, setting the line for inside the goal. The crease color is a beautiful blue, similar to sky blue on a clear day or coral blue. The crease is then marked inside light red lines, not as bright as the goal posts to mark its boundaries.

The goalie box or crease is eight feet wide and extends one foot (30cm) past each gaol post from both ends. In addition, there are two different shapes of hockey creases used in different leagues.

The NHL standard crease is straight-sided with a rectangle top line, whereas the IIHF crease uses a full semi-circle crease. Generally, all domestic leagues from the NHL, AHL, CHL, KHL, Liiga, SHL, and more uses the standard NHL version. However, the Olympics, world championships, world juniors, and some non-pro leagues use the full semi-circle crease.

As a goalkeeper, it’s best to defend the goal within the goalie box because all the angles are mostly protected, and it’s easier to move within the small marked area. You can quite accurately know where you are within the crease, so you don’t constantly need to look back at the goal to see potentially dangerous angles where the puck could go.

Related: What Is A Hockey Line?

Are Players Allowed In the Crease?

I already mentioned that the goalies could move freely outside the crease, although that isn’t usually the best choice. However, are the hockey players allowed within the blue goalie box, or does it cause a penalty?

According to the NHL Rulebook, players are allowed in the crease without penalties if they won’t impair the goalkeeper’s ability to move freely within the crease or initiate deliberate contact with the goalkeeper. Also, the puck must enter the crease before an attacking player, or his stick can enter.

Suppose an attacking player intentionally interferes with the goalie, makes it hard to move within the crease, or enters the crease even with a stick before the puck. In that case, it will result in a minor or major penalty, which the referee determines. A goal will be disallowed if one is scored during such an event. These rules also apply if the attacking player pushes a defensive player that interferes with the goalie’s ability to move.

However, any penalties won’t be issued if an attacking player has been pushed, shoved, or fouled by a defending player causing him to come into contact with the goalkeeper, as this won’t be deemed contact initiated by the attacking player.

So, the attacking players are allowed within the crease as long as the puck is within the box, and they won’t intentionally hinder the goalkeeper’s ability to protect the goal.

Why Is It Called the Crease?

The name goalie box is much more logical to understand as it’s the blue box in front of the goal where the goalkeeper will spend most of his time. However, the name crease isn’t as self-explanatory, so it raises the question, why is it called such?

This is the most commonly believed theory where the name crease comes from; however, it isn’t 100% certain as there are more theories.

One theory is that the goalie box is called crease, as the goalies can rough up the ice within the area with their skates to pile up the snow against the postings and alter the pucks’ movement. This can be called creasing the ice surface, which is why it’s believed to originate from that.

I’m still confident that the first theory is the right, as the word crease has been in use long before ice hockey. However, in our lacrosse and cricket examples where the crease is used, I’m not sure where the word originates before that. But in ice hockey, crease comes from other sports with the same meaning.

Why Is the Crease Blue In Hockey?

There are three primary and three secondary colors, yet by mixing them, we get various depths and shades, resulting in over 10 million colors. Out of all colors, why is the hockey crease light blue?

The hockey crease is painted blue because it stands out from the other sports colors, such as white ice or black puck. The distinctive blue shade makes it easy for the goalkeeper to stay within the box, for the players to see the puck, and for referees to make judgments.

The light blue crease is then marked within red lines because the opposite color of light blue is red. This makes it extremely clear for everyone to see where the crease begins, minimizing unclear situations for the goalie, players, and referees.