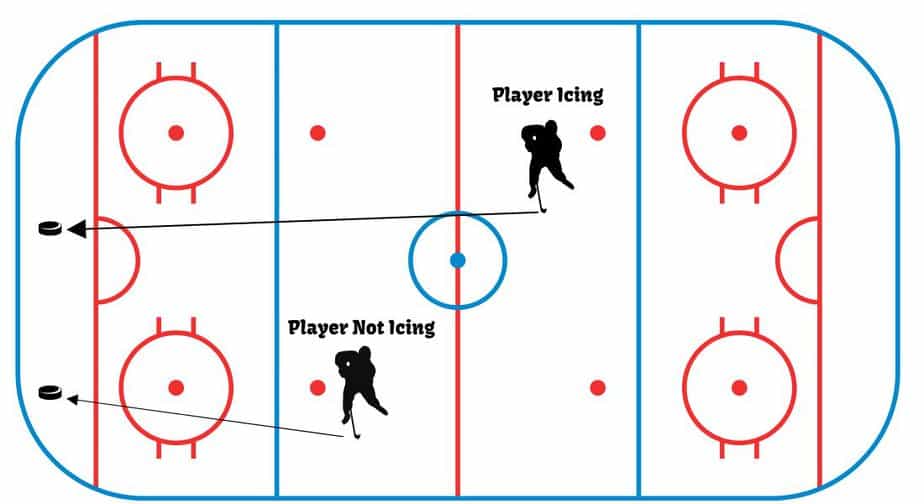 Hockey is a sport with many rules where some are easy to understand, whereas others, not so much. The icing rule is from the easy end, yet it can be overwhelming if you don’t know what it’s about. In this article, I’ll explain what and how icing occurs, why the rule was created, exceptions, and even rule variations. So, what is icing?

Icing in hockey is a rule violation where a player strikes the puck behind the red center line across the opponent’s goalie line without getting touched or going in the goal.

However, if anybody touches the puck before it crosses the goalie line, the game will continue as it was. Also, if you would happen to score, a goal is awarded for your team, and no icing and face-off will occur.

Here’s a simple explanation video on the meaning of icing in ice hockey.

When a guy one end of the ice dumps the puck way down to the other end, that’s icing.

Snoop Dogg couldn’t have put it better, so the meaning of icing should be clear now. Next, you’ll learn why icing is a thing and why it was created.

Why Was The Icing Rule Created?

When you think about icing and how it works, it becomes clear that its meaning is to prevent players from striking the puck far into the offensive zone, but why is that?

The icing rule in hockey was created to prevent players from delaying the game when leading but in disadvantageous positions where opponents could potentially score. This common practice worked so well that an icing rule was created in 1937.

Dumping the puck to the other side of the rink away from your end is a very smart delaying tactic when you think about it, especially if your team is leading by one score at the end of the game, but the opponents are coming in strong.

In such a situation, you’re under a lot of pressure, and getting rid of the puck by dumping it as far away as possible is a great way to unload the pressure and playtime.

However, delaying time like that in a sport isn’t considered good practice for three reasons.

You might argue that if you lose the puck, it’s your fault, and rules against that shouldn’t be made. You might be right, but the icing rule is good for all three things. If only one of the three reasons were reality, the icing rule might never have happened.

Related: What Do Hockey Players Sniff? (3 Interesting Reasons Why)

Are There Exceptions To The Icing Rule?

Icing is an important rule in hockey because it keeps the game fair and interesting. However, there are three exceptions to icing when it won’t lead to a complete game stop and a face-off.

The three exceptions to icing in hockey are if anyone touches the puck before it crosses the goal line, if the puck goes inside the goal, or if a shorthanded team does it.

It’s quite obvious that if someone touches the puck on the right side of the center line before it goes over the goal line, it doesn’t violate the icing rule, and the game continues.

However, if the puck goes inside the goal, which isn’t uncommon when a team has removed their goalie and gotten a sixth player on the field, it isn’t icing but a goal.

The most notable exception that isn’t known to many is that a shorthanded team (fewer skaters on the ice) can legally ice the puck in professional leagues. In the meantime, the team on power play must obey the icing rule and can’t do it.

However, most amateur leagues, including USA Hockey, changed the legal shorthanded team icing rule in 2017, so they can’t ice the puck even when underpowered.

How do Referees Indicate Icing?

Here’s an instructional video of a hockey linesman indicating icing and a few tips for those who are interested in learning about being a linesman.

The icing rule in ice hockey isn’t as straightforward as it sounds. In fact, there are three variations of the rule used by different leagues and levels of play.

Touch icing means that the opposing team player (not the goaltender) needs to touch the puck to initiate stoppage of play and a face-off on their opponent’s side.

If the puck is touched by a teammate of the players who iced the puck or the opposing team’s goalkeeper, the icing won’t happen, and the game continues as it was.

Touch icing can result in vigorous races for the puck.

No-touch icing, also known as automatic icing, is a variation that instantly stops the play when the puck crosses the goal line.

Most amateur leagues worldwide use automatic icing, including USA Hockey.

In hybrid icing, the play is stopped if the player on the opposing team reaches the face-off dot first. This way, there’s no need to skate as far as the goal line to touch the puck.

Hybrid icing is the most common icing variation used in professional leagues such as NHL, AHL, KHL, European Pro Leagues including Liiga and SHL, NCAA College Hockey, and some minor amateur leagues.

Hybrid icing reduces the chance of injury by colliding on the boars yet keeps the possibility of competing for the puck.

The main difference between the icing variations is the possibility of injury and the chance of winning or waving off the icing.

Logically, professional leagues want to keep things interesting without exposing the players to high chances of injury (hybrid icing). Although, there has been discussion about whether the NHL should institute no-touch icing.

In contrast, amateur leagues want to decrease the possibility as much as possible, which is why no-touch icing is used.

Related: What Is The Crease In Hockey? (Explanation & Rules)

The icing rule began in 1937 but hasn’t always been the same. Below you’ll find the most notable changes to icing during history.

In 1937, “icing” was first introduced, and the rule was initiated. The most famous game that affected the rules’ birth was the game between Boston Bruins and New York Americans, where the Americans had a 3-2 lead and iced the puck over 50 times.

The icing rule was changed in 1951 in that if a goaltender touches the puck, the icing rule wouldn’t apply, and the game would continue.

In the 70s, World Hockey Association was a competitor league of the National Hockey League. They had many ideas over the NHL and gained popularity because of that.

One of the exceptions in the WHA was that shorthanded teams couldn’t ice the puck, whereas they could in the NHL.

The icing rules were changed again in 1990-1991; if the puck touched or passed through the goalies’ crease when the goalie was removed, the rule wouldn’t apply.

In addition, the International Ice Hockey Federation took over the automatic icing (no-touch icing) rule in 1990 because Luděk Čajka rushed for the puck in an icing situation and crashed into the boards, gained major spinal injuries, and ultimately died a few weeks later.

Here’s a video of the unfortunate event… A warning, it may be distressing to watch.

There’s much to know about icing, so I hope this article gave you the answers you were looking for!

Why Isn’t Clearing The Puck Icing?

When one team is on the powerplay, and the other is shorthanded, clearing the puck isn’t icing for the shorthanded team in professional leagues, whereas the team on powerplay can’t ice the puck.

Why Does Goalie Raise Hand For Icing?

When a puck is iced, a goalie might raise his hand to raise awareness for his teammates. When a player is skating to reach an iced puck, the goalie sees the referee more easily, so the goalkeeper lets the player know how hard he should skate and whether it gets waived off.

Do They Call Icing In Olympic Hockey?

The same rules of icing apply in Olympic hockey as well. The icing will be called when a puck is shot behind the center line across the opposing team’s goalie line.