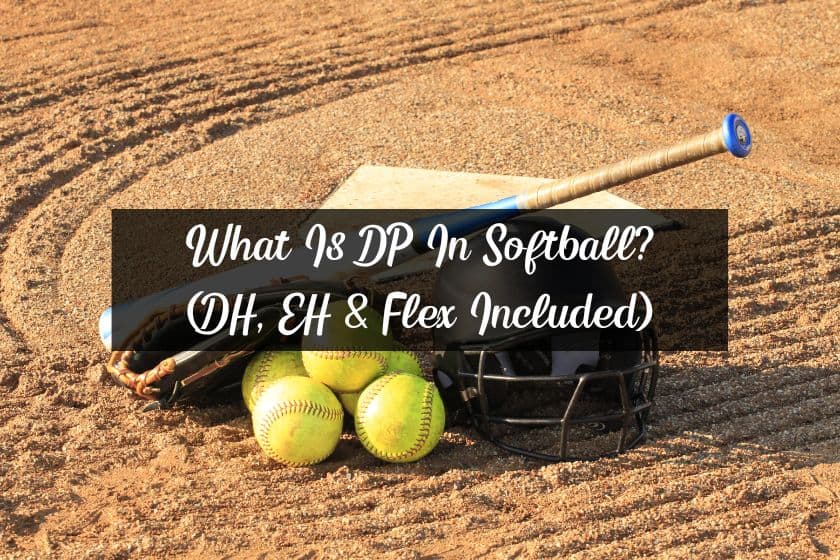 Softball is filled with excitement and mysteries. Unless you get the foundation right, you can’t grasp the game. One of the variables that have often puzzled many softball fans is the designated player (DP). What is DP in softball?

A designated player in softball bats for a specific defensive player at the start of the game and also plays defense. The choice of a defensive player needs to be made prior, but the player takes a spot in the batting order.

Is a DP different from other batting positions? Are there other rules to follow? Let’s find out about them in this article.

Related: What Is OPS In Softball? (Formula & Values)

Purpose Of DP In Softball?

DP in softball aims for coaches to strategize better and arrange players based on their expertise – offense and defense. This helps organize lineups and enables other players to capitalize on their strengths.

The designated player doesn’t appear in the defensive lineup. As per softball rules, the team can append the final (or tenth) player. The DP takes one of the spots, but the coach keeps others informed about the position of the DP.

How Do You Use DP In Softball?

A DP in softball doesn’t need mandatory involvement. However, if used, the player must be positioned at the start of the lineup.

There is also a FLEX player who’s responsible for taking care of fielding while the DP remains on the batting order. The FLEX that starts the game will also capture the last spot (tenth).

DP is highly recommended for professional competitions where coaches need flexibility in player lineups and strategize based on their strengths.

While there are advantages to having a DP on the softball team, there are various rules to adhere to:

In several aspects, the designated player (DP) in softball is a mere replacement for the designated hitter (DH). Like DH, DP also gives complete leverage to the coach to use him appropriately and for the team’s welfare.

Here’s one example of the lineup:

You can note how the team has DP and FLEX in the 7th and 10th positions, respectively. Pinch-hitter, FLEX, and pinch-runner are allowed to replace DP.

In that case, a substitute (possibly, a pinch-hitter) replaces DP listed on the table. The previous DP can choose to re-enter when required, and that’s when the substitute goes back.

As a softball fan, you should note that there’s no termination for a DP. The team’s lineup number can fluctuate between 9 and 10 due to the possibility of re-entry.

A DP is expected to be a good batter to hit better and support the defender on the other side.

Can DP Play Defense In Softball?

A designated player can play defense but shouldn’t be restricted only to defense. Softball leagues also encourage FLEX players and DP to remain on the defense simultaneously.

So, what’s the procedure when the DP plays defense? Let’s understand here.

When DP plays defense for FLEX, it means the discontinuation of FLEX from the game, and the lineup reduces to nine players.

The DP remains in the same spot in the lineup.

Related: What Is A Utility Player In Softball? (Role & Required Skills)

Who Hits DP In Softball?

As per softball utilization strategies, DP hits, and a FLEX enters the lineup to run for DP. This allows DP to re-enter and complete the hit.

The ideal sequence in softball is to let DP hit safely with the run of FLEX.

Difference Between DP and DH

A designated hitter (DH) is limited to batting but has no prominent field position. Contrarily, a designated player (DP) has a listing on the lineup (although not on the defensive side).

DH was commonly used in American leagues, and these hitters had to bat, replacing pitchers. Those hitters with good hitting abilities and poor athletic abilities hold strong values and are recognized on home plate.

The World Baseball Softball Confederation passed a decision in 2003 to replace DH with DP. Subsequently, most professional and recreational softball leagues introduced DP to their teams.

Although this replacement happened, positions significantly varied in their abilities and responsibilities in the game.

As soon as DP came into the picture, teams were allowed to add the tenth player and include DP in the batting order.

Unlike DH, which restricted players to batting, the new rule allowed coaches to use DP to play offense and defense. However, these are subjected to association rules and the opponent’s position.

Difference Between DP And Flex

The DP/FLEX rule was introduced in 2003 to promote further flexibility and positive partnerships between players in a game. While both terms are used synonymously to refer to players, there are visible differences.

Can A Flex Player Be A Courtesy Runner?

When the team contains ten players and uses DP/FLEX, all players participate. Further, the player shouldn’t remain on the lineup. This leaves no chance for the FLEX to become a courtesy runner.

Difference Between DP And EH In Softball?

A designated player (DP) remains within the batting order and takes a position. Contrarily, an extra hitter (EH) is an additional player and occupies a position in the hitting lineup.

The roles of DP and EH have huge differences. After passing the DP/FLEX rule, teams are allowed to use DP when needed. However, extra hitters aren’t widely encouraged. It is essential to look at the rulebook of the league to confirm the entry of EH.

Based on the competition level, teams are allowed to hold 10-12 players. These teams need to report the extra hitter to the official home plate before the game begins.

DP can play on offense and defense. On the other hand, an extra hitter can take only one position from the hitting order and can’t choose the defense side.

The advantage of having an EH is to provide more recreation to the existing lineup and allow coaches to revisit their strategies.

DPs are applied in adult professional leagues, while EHs are common in kid’s leagues. Otherwise, DPs are wonderful add-ons to softball leagues with their wide benefits when compared to EHs.

Thanks for reading this article. I hope it brought you great value that you can implement into your own life! Here are my top softball equipment recommendations that I think will take your game to the next level.