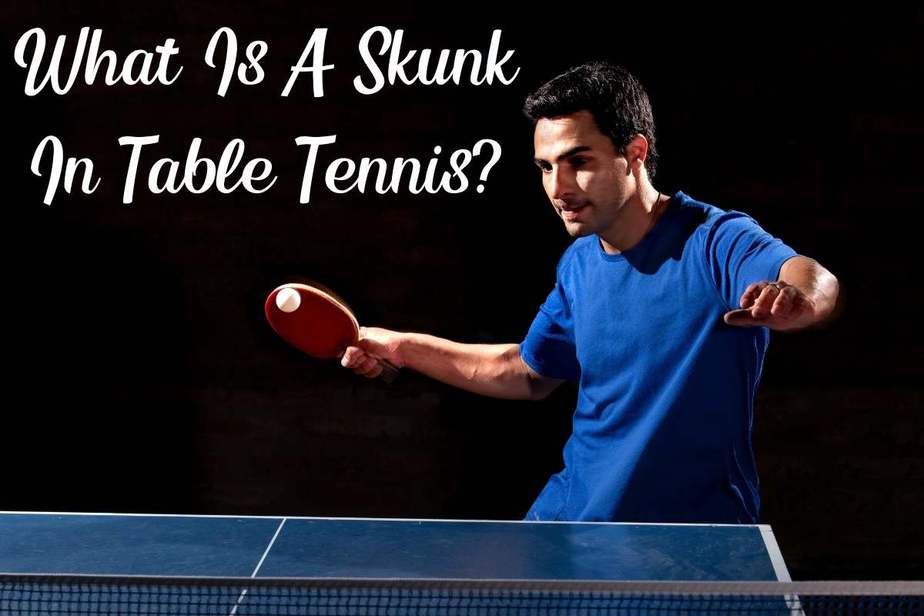 Table Tennis is an Olympic sport that is predominantly played by both amateur and professional players. It is a sport that demands a lot of skill, precision, and speed. When incompatible players compete against each other in a match, the scores tend to be uneven.

And this is because one player is more experienced than the other player. This is precisely what brings about a skunk in the match. On that note, what exactly is a skunk in table tennis?

A skunk is often applied in table tennis when a player scores a huge win against their opponent in a match. This happens when two opponents that are incompatible are made to compete against each other. This easily gives the experienced player an upper hand, and they are likely to win big.

Generally, a skunk is a rule that’s also known as the mercy rule or the knockout rule. It’s used in different sports such as football, basketball, volleyball and many more.

However, the ITTF (International Table Tennis Federation) does not recognize the skunk rule as an official rule in table tennis. That established, why is this rule not recognized by ITTF? Well then, let’s dive deeper!

What is the Skunk Rule?

The skunk rule is mostly used by players who are not yet equipped and skilled in table tennis. It asserts that when two players are competing against each other in a match, the player that attains the highest points wins the match.

If a player scores 7-0, 11-1, 15-2, and 21-3, they will most likely win the match. These scores are considered game-winning skunks that guarantee the success of the match.

Unfortunately, this rule is not an official rule in any sport, and it’s just used to promote fair play and sportsmanship amongst players. To become an expert player in table tennis, you need to know the official rules which will lead to success.

Is Skunk Rule an Official Rule in Table Tennis?

In every sport, there are always rules to guide players on efficiently and skillfully achieving success. For instance, there are a couple of official rules that are outlined in table tennis.

These rules are duly observed in every match and followed by every player. The skunk rule for one is not an official rule in table tennis as it is not applied during professional matches. Most professional players solely depend on their skills, and as such, they do not deem the skunk rule fit in any match.

Well, using the skunk rule at the beginning of a match preserves time and hefty efforts. Especially when the match is between inexperienced players and professional players. The skunk rule is undoubtedly one of the best approaches to end an indecisive match.

Plus, while international table tennis players do not value the skunk rule, rookies value it. And as such, they often use it to get more experience and enhance their skills.

Why is the Skunk Rule not an Official Rule in Table Tennis?

Many rules are formulated and established to enhance the performance of athletes. In the world of sports such as table tennis, many rules are created. Only the basic rules of the sport are made official.

The skunk rule promotes fair play in a match, and it is only used as a last resort to salvage a bad match. This rule is held in high regard, and amateur players mostly value it. However, ITTF does not include the skunk rule as one of the basic rules in table tennis.

Due to this fact, table tennis is usually played according to the basic rules. Nevertheless, the rule is used to end a match, especially when an experienced player competes against an amateur player.

When is the Skunk Rule Applied?

Several inexperienced players primarily fancy the skunk rule. It allows them to learn directly from a professional, and it’s an added advantage. Although they are readily defeated multiple times in a match, they still learn to develop their skills.

This rule is applied when an experienced player is directly facing an inexperienced player in a game. This rule has saved many reputable images of professional players. Well, table tennis is a sport that requires fierce competition, maximum concentration, and quick acceleration.

As a result, many techniques are perfected to match the intense competition the opposing partner brings to the table. For you to become highly skilled in table tennis, you need to practice countless times.

Preferably with a professional table tennis player to show you the ins and outs of the sport. Frequent practice will sharpen your skills and prepare you for an official match. In addition, the skunk rule is by far one of the best ways for you to learn from a real pro and at the same time improve yourself.

Who Uses the Skunk Rule in Table Tennis?

More often than not, the skunk rule is used in almost every sport available today. Although it is not an official rule, it is diversely used by amateur players in table tennis. The rule is not used by professional table tennis players who believe it is an insignificant rule.

Newbies value this rule as it drastically influences the techniques employed in a match. This paves the way for players to find the right persons to compete within a match. This will go a long way to lessen the time taken to play the match. And it decreases the lethargy of the match.

Pros previously used the skunk rule to discredit other players. This occurred when a professional player would score more wins than their opponent. The loser of the match would be subjected to do whatever the winner wanted.

It was a way for the professional players to show off their skills. Well, many players have discovered the significance of the skunk rule in table tennis. Furthermore, the rule is quite prominent in minor settings where many inexperienced players converse and learn from each other.

This process hastens the skills of the players and provides an opportunity to compete with international players. In addition, if you want to learn faster, then I’d advise you to seek the expertise of a professional table tennis player.

And you can do yourself some good to practice repeatedly. This will give you more advantage over other players in a match.

Well then, what are the official rules of table tennis, and how are they applied? Let’s find out more!

What are the Official Rules of Table Tennis?

Every sport has rules that are meant for guidance to perfection and accomplishment. Admittedly, there are many rules ascertained by different sports federations. Despite this fact, only the fundamental rules are made official and recognized by the federation.

And these official rules are strictly used in sports, especially during international matches.

Nonetheless, this does not undermine the importance of other rules. These rules are also used, but it’s only applicable when things become tough in a match. The table tennis body ITTF has carefully sketched out some basic official rules utilized in the sport.

1. Matches Shall Be Played to Eleven Points

This is one of the basic rules of every scheduled match, which the referee observes. The match must be played to eleven points.

Similarly, for the match to be won by the player. The scores are documented to prevent foul play in the match. Scoring less than two points will not guarantee a win in the match.

There are practically two sides of the table tennis table that alternates, serving two points at regular intervals. It’s more like hitting two birds with one stone. Unfortunately, there is a catch! If the match is tied by 10-10, they serve only results to one point at a time.

This usually happens when the players are highly skilled, and the competition is intense. Nonetheless, the tie is effortlessly resolved with another round of the match to determine the winner.

3 The Ball Must Be Thrown Up During a Serve

Most rookies tend to make the mistake of tossing the ball directly at their opponents, which is the wrong strategy. The ball must be thrown straight up and hit your side of the table before landing on your opponent’s side.

Notably, when the ball leaves your side of the table, it signifies the game is on, and every service is considered. Any super weird serves are strictly prohibited.

4. The Serve Can Land Anywhere During a Singles Match

During a one-on-one match, the ball can land on any side of the table. It may be on your side or your opponent’s side. This does not count as a penalty in the match.

Fortunately, if the ball bounces two or more times on your opponent’s side of the table, it’s highly a score of points. This rule works flawlessly with players in a singles match.

Numerous amateur table tennis players are often perplexed when it comes down to this rule. The explanation is quite simple and easy to understand. The ball must bounce in your proper court and your opponent’s right court simultaneously.

If 2-4 teams play the match, the teams swap members but still maintain the same position in the court.

6. You Earn a Point When the Ball Bounces Back Over the Net Involuntarily

This rule is favorable to many players who engage in a match. If your ball hits your opponent’s side of the table and bounces over the net without them touching it, it is considered a point. This also elevates your points and guarantees a win.

7. You are Permitted to Touch the able With Your Paddle Hand

Your paddle hand comprises your wrist and fingers. When playing a match, you are allowed to touch the table with only your paddle hand.

This means your body is not allowed to touch the table, only your hand as your hand is responsible for throwing the ball and playing the match.

8. Touching the Table With Your Non-Paddle Hadn Is Highly Prohibited

Playing table tennis requires full concentration, which means you can not slack at any point In the match.

This is one of the major reasons why table tennis players move side by side without touching the place. Well, you wouldn’t want to be penalized for relaxation during a match!

9. Play on the Horizontal Side of the Table

In the event of the match, your ball must hit the horizontal side as it will amount to a legal win. Unfortunately, if your ball touches the vertical side, it will not be considered and prove invalid.

10. The Honor System Is Adopted During Disagreements In a Match

The honor system is hardly used in table tennis. It is only incorporated when a referee is not available in a match. This system notes that every player must discover a way to solve their dilemma.

Alternatively, the players can start the match afresh to facilitate transparency and eradicate any form of foul play.

These are by far the official rules of table tennis that are fully enacted during any match. More rules have been established, but only the basic rules are considered in a match.