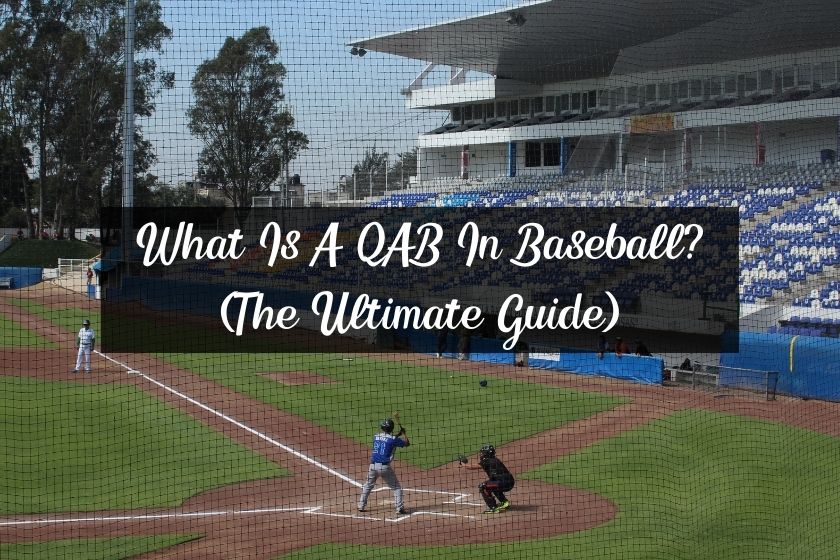 Baseball has evolved much in the last few decades. Likewise, stats have also been developed to assess the quality of play. One of the essential stats enabling teams to evaluate players is QAB. What is a QAB in baseball?

A quality at-bat (QAB) indicates the hitter’s performance at the plate appearance. It is not a widely reported stat but is a game-changer to teams as it influences the productivity of players.

As this stat does not appear on bulletins or newspapers, fans find it difficult to recognize its application and usefulness. In this article, let us discover further about this hidden and crucial stat. Let’s begin!

A QAB is achieved when the ball hits harder, a walk or a hit by a pitch after the plate appearance, pitchers engage for over nine pitches, and runners move towards scoring positions. The exact method to achieve a high QAB differs among coaches. However, a good QAB is mandatory.

When a plate appearance results in one of the situations below, it is recognized as a quality at-bat.

For instance, a long at-bat adds more prestige and value to the player. Any base hit taken by a batter can pull down players’ endurance. However, this is the ideal situation when the team needs to come together and focus on the team’s goal.

While these are scenarios influencing a player to achieve a quality at-bat, a large proportion of hitters fail to accomplish it because of one or more reasons:

Hitters tend to focus more on their personal strategies and give up the team’s performances. This is one of the reasons to achieve a low-quality at-bat.

Perhaps, the goals of players and teams can significantly vary. However, both should blend at some point, which is the sole reason for establishing a stat like QAB.

Importance Of QAB In Baseball

CJ Stewart, a leading hitting instructor, highlights the significance of QAB for hitters. This is a great stat to measure success.

Here is an instance to understand the role of QAB in baseball.

Assuming that a game has ended in a tie and one runner retains at the third base. He has already been credited with an out. The hitter has a chance to hit the ground ball as hard as possible. When the hitter does that, it results in the team’s victory as the runner loses the play.

This can sound like a trivial incident, but it is pretty common in baseball.

How To Calculate QAB?

A player gets credited with a QAB during these instances – hard-hitting of the ball, 2 RBIs, base hit, sacrifice flies, walk/hit by pitch, and base hit. There is no direct formula for QAB.

The formula to estimate the QAB percentage is:

Let us assume that a baseball match had a player recording 70 plate appearances. Out of these appearances, the player has achieved 15 QABs.

It is time to assess QAB %.

This percentage is used to compare with other players that have recorded similar plate appearances and scored QABs. The best of all progresses to the next season and holds a stronger position.

The goal is to score at least 55% for teams and 60% for individuals. Any percentage above these numbers indicates an excellent strategy.

An at-bat indicates a plate appearance with various outcomes like hits, errors, and non-sacrifice outs. A quality at-bat focuses more on plate appearances that aid the team in terms of goals.

There is a common misconception that every at-bat is a quality at-bat. This is totally wrong as at-bats limit their understanding to hits and errors. At-bat disregards the quality and the impact it can have on the team.

Contrarily, a quality at-bat does not demand the player to score an at-bat.

Every completed batting of a hitter is a plate appearance, and every batting that contributes toward the team’s success is QAB.

The number of plate appearances is a primary variable to estimate the QAB percentage. A player with high plate appearances and high-quality at-bats contributes positively to the team’s growth. Such teams are more likely to win and progress forward.

It is essential to avoid the conception that every plate appearance adds up to a quality at-bat. It is based on the team’s goals and players’ strategies for scoring a high-quality at-bat.

Is QAB An Important Stat?

QAB is a critical stat for assessing team cohesion and performance. It enables teams to individually assess players in association with several traditional stats to help with better quality of decisions.

Other stats like OPS and batting average address specific attributes of players. The only difference is that those stats are traditional and are displayed on the board. Unfortunately, this underestimated stat QAB is not widely spoken beyond baseball environments.

These are the scenarios when QAB becomes more crucial than ever:

QAB is more important than batting average as the latter limits to the number of hits, while the former considers various instances when the hitter has played better and contributed to the team’s success.

Baseball is filled with numerous stats, and the batting average is among the most popular.

A QAB is more complete and considers numerous aspects covering hitters and runners. Most importantly, it considers every movement or hit to determine if it is a quality at-bat. When a player records more QABs, he is productive and is an asset to the team. As a result, coaches instill confidence in such players.

Let us understand this difference with an example.

Let us assume that hitter A has recorded 40 QABs and 120 at-bats. This means the hitter is credited with a QAB percentage of 40.

Let us assume that another hitter, B recorded 24 QABs and 100 at-bats. The hitter here scores a QAB percentage of 24.

The coach compares the two. Hitter A is preferred over B because of its high QAB percentage. The coach recognizes the inability of the hitter B to achieve quality at-bats.

In this case, their batting averages don’t really matter. All that matters is the number of at-bats that can be considered quality. Baseball squads with hitters having high QAB percentages are highly productive.

It is evident that QAB is better than several popular stats and influences the team’s success. As baseball fans, being aware of this stat helps us better understand a player’s ability.

Thanks for reading this article. I hope it brought you great value that you can implement into your own life! Below you can find my favorite baseball bat, baseballs, and a glove that I think will take your game to the next level!