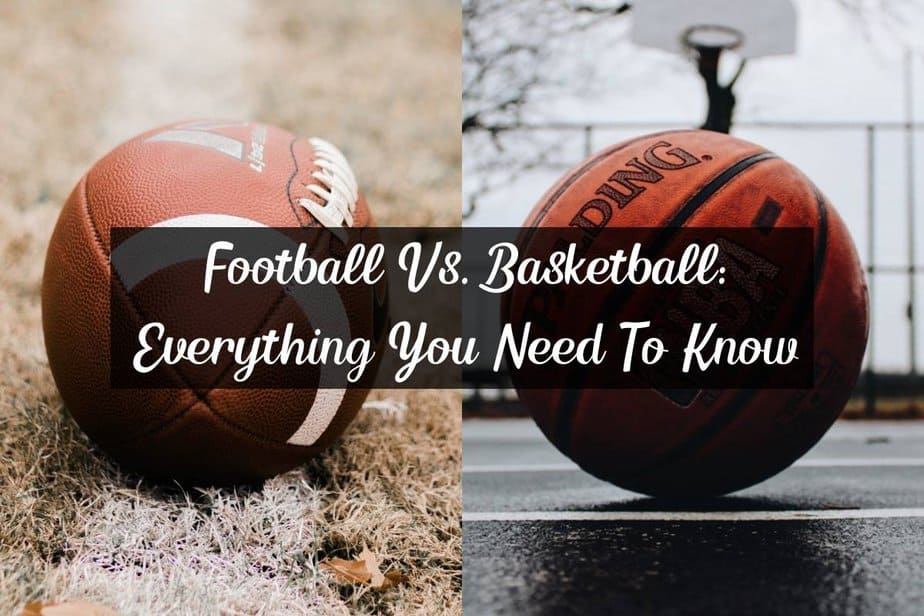 Football and basketball are among the most popular sports in the United States, and the popularity doesen’t stay within the borders either. The best players in sports are superstars, and as you might know already, it isn’t easy to become one. There are many differences between football and basketball in many categories. This article will walk you through the differences and similarities between the two sports. So, what’s the difference?

Football is different from basketball, such as more equipment and an outdoor playing field, whereas basketball is played indoors with less equipment. Also, football is considered harder, yet it’s more difficult to get into the NBA. Football is more popular in the US, and basketball is globally.

Let’s start with the playing grounds!

Basketball and football are so different, but the most noticeable is the field and court they are played on.

In addition to the location and size, the materials they are made from vary drastically.

Modern football fields are made from artificial turf instead of grass because of easier and cheaper maintenance, yet authentic grass fields exist.

However, all proper basketball fields are made from maple hardwood, yet other materials such as asphalt exist outdoors. Hardwood is the optimal court material for the ball’s bounce, and surface feel.

In football, you will score a goal by advancing to the opponent’s end zone with the football. The team will get six points by advancing with the ball to the end zone, which is called a touchdown. However, the ball can be kicked through the goalposts, which will award three points.

The biggest difference between football and basketball equipment is the ball. The only similarity between them is the color and material.

Footballs are shaped like an egg but even more spherical. The polar axis of footballs is greater than its equatorial diameter, which serves football purposes better. This allows spiral motion, easy throw, and secure catching for the players.

In contrast, basketballs are perfectly round as they should for a consistent bounce.

Both professional footballs and basketballs are made from leather, yet synthetic and rubber balls exist. Leather is the most expensive material of the three, but it’s the best performance-wise because it’s soft and supple.

Football and basketball shoes have some noticeable differences too. In short, football cleats are made for outdoor use; they have plastic studs on the outsole, the outsole is overall more durable, whereas basketball shoes are meant for indoors; they absorb shock very well and provide good lateral support.

That said, the average basketball equipment price is around $100, whereas it’s as high as $800 in football, potentially more.

Oh, and you will naturally need a basketball court and a football field in addition to the equipment.

Is Football Better Than Basketball?

One of the most asked questions is whether football is better than basketball and vice versa. Overall, this is an opinion-based answer, yet, there is an answer to be said when examining the facts on both sports.

Overall, basketball is better than football because it requires a more versatile skill set, it isn’t as dangerous, there are more participants both in the US and globally, and it can easily be played recreationally. In contrast, football is more dangerous, expensive, and it’s harder to play recreationally.

That said, the answer is ultimately opinion-based, as you might imagine. However, when weighing all the sports’ pros, cons, features, and attributes, basketball is equipped with more benefits.

To see the most notable ones side by side, see the table below, and you can get a good idea about it. However, this doesen’t mean that football can’t be better for you than it is for thousands if not millions of people.

Is Football Harder Than Basketball?

The difficulty is yet another highly popular topic of debate between football and baseball players and fan. Which sport is the more difficult one, or can it be said and proven?

Generally, football is harder than basketball because of higher physical demand, constant tackles, and hits. However, it’s more difficult to get to the NBA than in the NFL because there is fewer position, they all are similar, and there are more basketball players in the world.

The answer to this question isn’t as straightforward as it’s in difficulty between baseball and softball. Nonetheless, there is an answer, and it’s also ranked by ESPN. ESPN states that football is the world’s third hardest sport, whereas basketball is the fourth.

To further understand the analysis by ESPN, take a look at the ten skills the analysis is based on, and you can see why football is considered harder than basketball.

This, however, can be looked at from different points of view that result in different answers. In short, football is harder because the physical toll and safety risks are higher, yet, basketball requires more skill to play as a team has fewer positions, there are more players, and the positions are very similar compared to football positions.

Is Football or Basketball More Popular?

I have already revealed that football and basketball are some of the most played sports in the United States. In addition, they both belong to the ”big five”, including football, basketball, baseball, ice hockey, and soccer. So, which positions itself higher on the popularity scale, football or basketball?

In a situation like this where the participants and fans vary both in the United States and globally, it’s difficult to say an overall answer which sport is more popular.

In the United States, 37% of people say that football is their favorite sport, whereas 11% vote for basketball. However, there are 8.9 million football participants in the US, whereas basketball players exceed 30.3 million. This is because football is rarely played recreationally, whereas you can find a basketball court in every neighborhood.

When moving beyond the borders of America, the difference is clear which sport is more popular. When looking at the top 10 most popular sports, basketball comes third with over 2.4 billion fans, whereas football or American football globally isn’t found from the list.

Below you can see where football and basketball are the most popular. Both sports are globally most popular in the United States, but the following countries might surprise you. Take a look if you will!

Earning Differences Between Football and Basketball

Last but not least, the top players’ salaries in both NFL and NBA would make the average joe faint where he stands. It doesn’t surprise me, as if I would see an increase of tens of millions of dollars or more each year on my bank account and other means, I would faint too. A victor needs to be stated, so which is the king of earning salaries, football or basketball?

As you can see, the earnings are astronomical for both sports. The average human like me and presumably you can’t begin to comprehend what those numbers can buy you. Oh, and those numbers aren’t going to end for most guys soon, but they keep coming each year!

After seeing the basketball player earnings, especially how close the top 5 are to each other compared to the football players, it’s no wonder that basketball players earn the most of all sports, on average. Some individuals, such as Roger Federer from tennis, managed to earn $106 million in one year, but that’s not what you would call average.