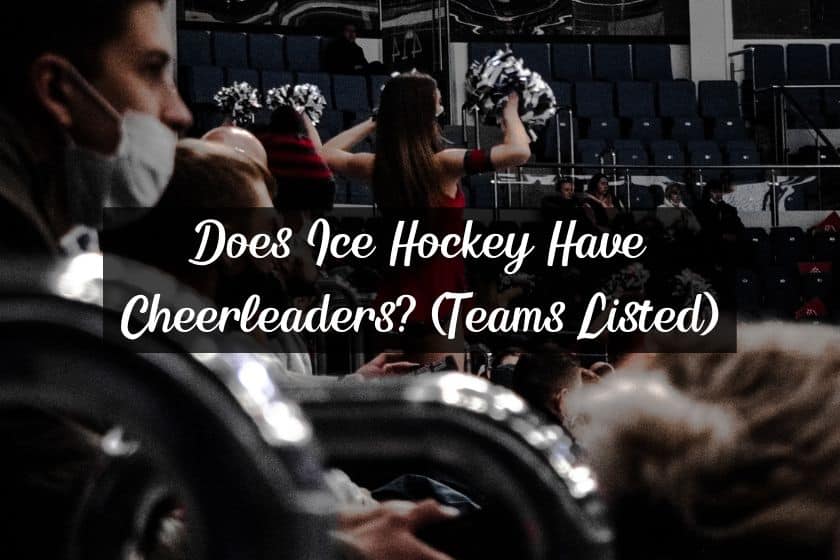 Cheerleading is a big part of other major sports, such as basketball and football, so the question arises whether hockey has cheerleaders?

There are no official cheerleaders in Ice hockey, but there are very similar ice girls. However, the responsibilities of ice girls vary from cheerleaders in other sports. Their main job is to plow excess snow during intermissions, help with giveaways, greet the fans, and dance one the aisles.

In other sports and leagues, such as in NBA or NFL, the cheerleaders do only dancing and cheering more professionally than ice girls do. In contrast, ice girls are more involved amongst the fans, have on-ice duties (the most important task), and travel with the players to community events.

You won’t see hockey “cheerleaders” in any other leagues than professional hockey and some universities, so local games don’t have ice girls but other staff or volunteers to shovel the ice during stoppages of the game.

Also, there has been a lot of controversy about the working conditions of ice girls. Reasons include tiny outfits in freezing temperatures, prohibition of eating during shifts, sexualization by some fans, low pay, and another mistreatment.

Related: All About Zamboni Drivers: What Is It, Salary & More

What Do Ice Girls Do In the NHL?

There are five tasks for ice girls in the NHL; the most important is the on-ice duty.

The only on-ice job for the ice girls is the most important one: to skate on the ice during intermissions and stoppages of the game and shovel snow accumulations to clear the ice.

Ice girls may have to clear the ice off other things such as snow, such as hats when a player makes a hat trick, and items thrown by fans.

The reason why ice girls are mistaken as cheerleaders is that they do cheer and dance during play. You can often see the hockey ice girls dancing on the aisles or designated areas, wearing cheerleading costumes and even pom poms.

If you have ever gone to an NHL game assuming they have ice girls, you might have been greeted by beautiful girls with cheerleading costumes when entering. If you have wondered why it’s because it’s one of their jobs as ice girls.

Sometimes, ice girls can be seen shooting t-shirts to the crowd, giving free fan gear to the audience, and communicating with the crowd to hype up the arena.

The final task of the arena includes community work with the team and players, such as visiting hospitals, schools, elderly homes, and similar places to make an appearance.

Related: How Long Do Hockey Games Last? (Timer Vs. Reality)

Which NHL Teams Have Cheerleaders?

If you have been a regular NHL fan but haven’t seen any ice girls, there is a reason. It’s because not all teams have ice girls on their payroll. In fact, more and more teams have dropped off the ice girl program in recent years to make the games more family-friendly.

Here are the NHL teams that currently have ice girls

However, the ice will be cleared off the snow during game stoppages and intermissions by ice crews that may include both women and men. These crews don’t dress in small cheerleading outfits removing the issue of controversy that has been around the subject.

For example, here’s a picture of the Pittsburgh Penguins Ice Crew. They feature team jerseys, clean black slacks, and black skates, making a more professional look where the temperature and other needs have been accounted for. Below you’ll find a Twitter Fanpage for ice girls to compare the outfits.

You should note that not all ice girls feel bad about their jobs in any way but rather enjoy it. You can clearly see the joy of ice girls from the pictures above.

There are a lot of demand for ice girl jobs and only a limited number of positions so that they will be filled no matter what. For example, when Boston Bruins held tryouts for their ice girls in 2013, 625 women applied, and only 18 got the job.

It depends on who you ask and who the worker is, whether one feels bad or good about the job.

Related: Why Are Hockey Jerseys Expensive? (& How To Find Cheap Ones)

When Did NHL Get Cheerleaders?

The first NHL ice girl squad appeared in the 2000-2001 season by the New York Islanders, who changed the tradition of having an all-male ice crew.

When the ice hockey world was surprised about the change in the game, many teams followed the lead, such as Dallas started and had their own ice girls the very next season.

How Much Do NHL Cheerleaders Make?

The job of an ice girl is a cold one, so that you would expect at least a decent compensation from their job. So, how much do NHL cheerleaders, better known as ice girls, make?

That being said, the earnings aren’t glamorous, especially if the makeup and styling need to be paid yourself, which could cost up to $4,200 annually in cosmetics.

Of course, work amount, experience, negotiation skills, organization, and other factors can drastically affect the salary. Still, you won’t become rich as an ice girl, yet it can be fulfilling in other ways than money.

How to Become an Ice Girl In the NHL?

If all the information in this article about ice girls fascinates you and you would like to be an ice girl, how do you make your dream a reality?

To become an ice girl, you need to perform well in the auditioning process for the teams based on which the new ice girls are chosen. Required skills include great skating skills, dancing, snowplow handling in front of the judges, and pleasing overall presence and looks.

The required skills aren’t something unachievable. If you don’t know how to skate, find a local ice rink, and learn how to and when arriving at the audition, be sure to have a neat appearance.

So, how do you find auditions for ice girls? Here’s how;

Go to the NHL Website > Teams > Select A Team Who Has Ice Girls (Such As Dallas) > Fans > Ice Girls (Or Other Similar Choice) > Read The Provided Resources & Instructions.

Follow the same method for the team in your area, and if you want to be part of an Ice Crew, you can find more teams than the ones with only ice girl programs. You can also search NHL ”Ice Girl” or ”Ice Crew” auditions on Google, and many results will pop up.

Personally, I don’t see anything wrong with ice girls if they are provided with good working conditions. Cold is a problem, yet it shouldn’t become a surprise for the applicant as the temperature and work clothes are known. What about you? Do you find ice girls important for hockey culture?