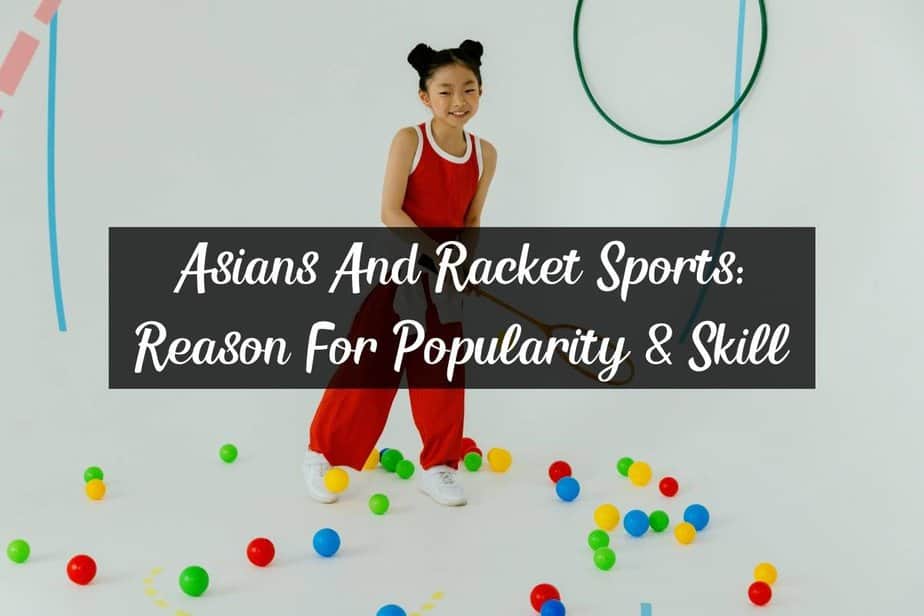 In this article, I’ll explain why racket sports are so popular in Asia and why they are so good at them compared to the rest of the world.

Why Do Asians Play So Much Racket Sports?

There are over 300 million table tennis players and 220 million badminton players globally. Those numbers lift them to the top of the list of the most popular sports in the world. That said, most of the players come from Asia, so what’s the reason for it?

Racket sports are popular in Asia because of their great success, attracting more people to play. In addition, racket sports such as badminton and table tennis are easily accessible and affordable for everyone, without a requirement for huge outdoor fields or expensive equipment.

The popularity of racket sports, especially badminton and table tennis, is a neverending wheel. First, Asians gain international competitive success in sports, attracting more people to participate. When the government and other authorities see the rising popularity and demand, more table tennis clubs and badminton courts are made, further increasing participation.

Now, let’s take a closer look at how popular rackets sports are in Asia. First, badminton.

By popularity, the top 10 table tennis countries aren’t as Asia-dominated as badminton. Out of the ten countries, only five are Asian countries. Still, the top positions, Singapore, the Philippines, and China, are far ahead of other countries when examining the regional popularity scale.

Why Are Asians So Good At Racket Sports?

Now that you know why racquet sports are so popular in Asia, the answer to why Asians are so good at them is yet unanswered. So, why is that?

About the Asian body type, let’s talk science so I can back up my claims.

Table tennis and badminton are both high-speed sports that doesen’t require a drastic amount of power. Therefore, the sports are more fitting to the average Asian body type, which tends to be smaller when compared to people around the world.

A study found in the National Library of Medicine states that Asians tend to have smaller body frames, based on the wrist circumference or elbow width, compared to western people, for example. Smaller bodies are faster than big but less powerful. As it turns out, table tennis and badminton are extremely fast sports that rely more on wrist movement for power instead of pure strength.

When you think about it, it makes total sense. Why do you think Americans are so good at basketball and American football? They are taller and bigger, which gives them an advantage. Again, the statement is, on average, based on large scientifical studies.

The other reason for racket sports and the success of Asian people is because the global competition isn’t as fierce. Badminton especially is seen as a relaxed backyard hobby practically everywhere than Asia, resulting in fewer participants and thus, less real competition.

Regardless of the reasons, you can easily see the Asian domination by looking at Olympic medals from racket sports such as badminton and table tennis. Let’s start with badminton.

Out of the 12 countries with Olympic medals from badminton, seven are Asian, and five are non-Asian.

In addition, in the top 6 countries, only one country, Denmark, has managed to compete with the top Asian countries.

Next, table tennis and their Olympic medalist countries,

Again, out of the total 12 nations, 7 Are Asian. However, the dominance in table tennis isn’t as clear as in badminton. China has a whopping 60 Olympic medals, whereas the next country has 18.

An even bigger gap is with China, and Asian country and the best performed non-Asian country, Sweden from Europe with 3 Olympic medals.

What Country Is the Best In Badminton?

Many countries have won Olympic medals from badminton and even more people within their countries. This raises the question, what country is the best in badminton?

China is a land of many people, and given that badminton is extremely popular there, it’s no wonder that they produce a large number of world-class badminton players.

However, table tennis is even bigger in China, especially its national sport. Let’s learn why.

Table tennis is China’s national sport because Chairman Mao Zegon, the former president of the Republic of China, declared it in 1954. The choice was made because table tennis can be played with a few inexpensive pieces of equipment, and it wasn’t highly popular in western countries.

A national sport can’t be horse polo which costs more to play annually than an average Chinese earns in their lifetimes. So, that’s one of the reasons.

Third, each country needs to have something they can call own, without copying or being too similar with other countries, in China’s case, especially the Western ones. Thus, table tennis was a great choice as a national sport because it wasn’t very popular in Western countries.

Nowadays, the person who wrote this post, a.k.a me, lives in a Western country and can’t get enough of table tennis! It’s one of my favorite sports.

Thanks for reading this article. I hope it brought you great value that you can implement into your own life! Below you can find some badminton equipment that I love and think you could like!